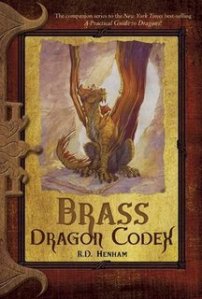 Kyani paced the Grand Conversation Hall, his claws clicking against the marble floor, his tail lashing back and forth. His stomach growled, and he rippled his brass wings in agitation.

“There now, you see,” he said, as if his parents were with him in the vast chamber. “I’m starving, and where are you? Gone off for days now. And you told me to stay here and wait. Don’t even poke my nose out of the lair until you come back. But no, no. You didn’t come back, did you? No you didn’t, and I’m stuck here all alone, starving.”

Kyani let out a petulant roar and climbed the steps into the Hall of Art. He padded among his parents’ treasures. A huge tapestry, stitched with green and gold thread, showed a landscape thick with trees and flowers. A stream of sparkling blue water swept down through the forested scene.

He shook his head at it. “You can’t be real,” he said. “That many trees? So Green? And running water like that, it would evaporate in a day or two.”

He stomped past an artistically twisted ancient tree branch. “So beautiful,” he said, sniffing the dead piece of wood. He snaked his long tongue out to lick it. The wood tasted dry and sweet.

His stomach rumbled again, and he shook his head. His parents’ treasures couldn’t fill his stomach. Well, maybe they could, but his parents would never forgive him for eating their valuables.

“Alone,” he grumbled. “So alone. No one to talk to. Where are they? Where have they gone? Do you know?” he asked the tree branch.

“How should I know?” he answered for the wood, making his voice sound low and raspy.

“Well you should know,” he yelled at the branch. “And you”–he kicked a bold of shimmering material–“fine lot of help you are.”

“Ouch. Don’t kick me,” he said in a high, squeaky voice that he imagined the material would speak in.

He walked the length of the hall, licking a porcelain vase on one side, sniffing an oil painting of a sunrise on the other.

“Yum.” He snatched it up in his jaws, and then set it down unharmed.

Imitating his father’s deep voice, Kyani growled, “That is a priceless painting commissioned by Astinus himself. Irreplaceable.”

Kyani snarled at it, then stormed out of the hall into the tunnel on the far side. He tucked his wings tight against his back, stuck out his long neck, and strode toward one of the lair’s many bolt-hole exits.

“Stay here,” he muttered. “I can’t stay here forever all alone.” His voice rumbled down the empty corridor. Alone . . . Alone . . . He slumped to the ground and laid his head on his front legs.

The smell of the desert heat came from the end of the tunnel. Golden light filtered through the sand that covered the entrance. “What if something happened to them? he whispered. “What if they’re not coming back?” What if they need my help?”

He jumped to his feet. “I’m coming,” he roared. He lumbered forward and burst through the sand, out into the desert heat. . . .